On-Premises vs Cloud: Which is Right for You?

On-Premises vs Cloud: Which is Right for You?

Software as a Service (SaaS) cloud computing differs from on-premises software in one critical way. While a company hosts everything in-house in an on-premise environment, in a cloud environment, a third-party provider, like Oracle for example, hosts these components for you. This allows companies to pay on an “as-needed” basis and effectively scale up or down depending on overall usage, user requirements, and the growth of the company.

A cloud-based server utilises virtual technology to host a company’s applications offsite. There are no capital expenses, data can be backed up regularly, and companies only have to pay for the resources they use. For those organisations that plan aggressive expansion on a global scale, the cloud has even greater appeal because it allows you to connect with customers, partners, and other businesses anywhere with minimal effort.

Additionally, cloud computing features nearly instant provisioning because everything is already configured. Thus, any new software that is integrated into your environment is ready to use immediately once a company has subscribed. With instant provisioning, any time spent on installation and configuration is eliminated and users are able to access the application right away. However, this shorter implementation time is largely at the cost of customisability.

Key Difference of On-Premises vs Cloud

As outlined above, there are a number of fundamental differences between an on-premises and a cloud environment. Which path is the correct one for your enterprise depends entirely on your needs and what it is you’re looking for in a solution.

On Premises: In an on-premises environment, resources are deployed in-house and within an enterprise’s IT infrastructure. An enterprise is responsible for maintaining the solution and all its related processes.

Cloud: While there are different forms of cloud computing (such as public cloud, private cloud, and a hybrid cloud), in a public cloud computing environment, resources are hosted on the premises of the service provider, but enterprises are able to access those resources and use as much as they want at any given time.

On Premises: For enterprises that deploy software on-premises, they are responsible for the ongoing costs of the server hardware, power consumption, and space.

Cloud: Enterprises that elect to use a cloud computing model only need to pay for the resources that they use, with none of the maintenance and upkeep costs, and the price adjusts up or down depending on how much is consumed. 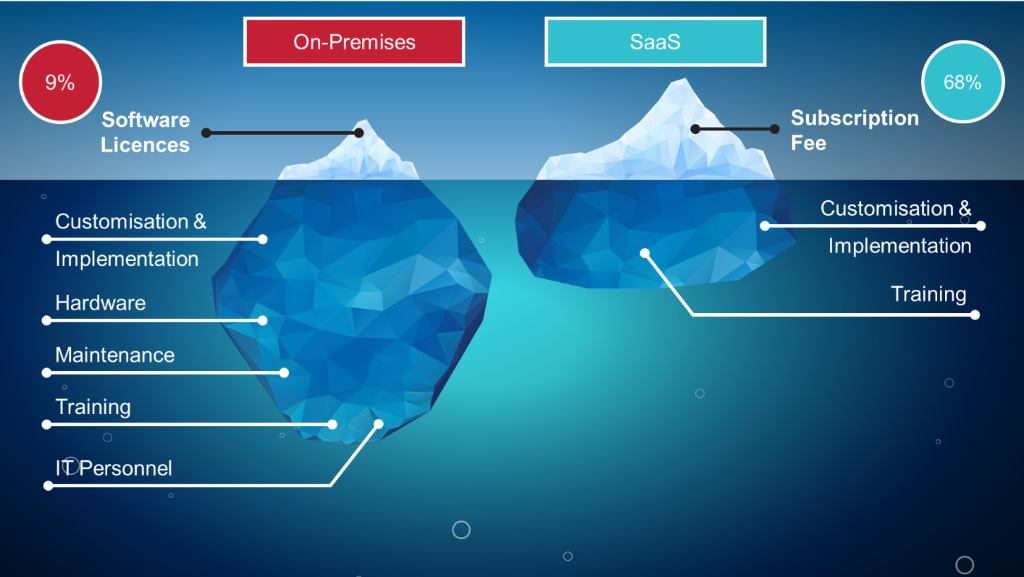 On Premises: In an on-premises environment, enterprises retain all their data and are fully in control of what happens to it, for better or worse. Companies in highly regulated industries with extra privacy concerns are more likely to hesitate to adopt cloud solutions for this reason.

Cloud: In a cloud computing environment, the question of ownership of data is one that many companies – and vendors for that matter, have struggled with. Data and encryption keys reside within your third-party provider, so if the unexpected happens and there is downtime, you maybe be unable to access that data.

On Premises: Companies that have extra sensitive information, such as government and banking industries must have a certain level of security and privacy that an on-premises environment provides. Despite the promise of the cloud, security is the primary concern for many industries, so an on-premises environment, despite some if its drawbacks and price tag, often makes more sense.

Cloud: Security concerns remain the number one barrier to a cloud computing deployment. There have been many publicised cloud breaches, and IT departments around the world are concerned. From personal information of employees such as login credentials to a loss of intellectual property, the security threats are more significant.

On Premises: Many companies operate under some form of regulatory control, regardless of the industry. Perhaps the most common one is the Health Insurance Portability and Accountability Act (HIPAA) for private health information, but there are many others, including the Family Educational Rights and Privacy Act (FERPA), which contains detailed student records, and other government and industry regulations. For companies that are subject to such regulations, it is imperative that they remain compliant and know where their data is at all times, which is significantly simpler to do with an on-premises environment.

Cloud: Enterprises that do choose a cloud computing model must do their due diligence and ensure that their third-party provider is up to code and in fact compliant with the specific regulatory mandates within their industry. Sensitive data must be secured, and customers, partners, and employees must have their privacy ensured. 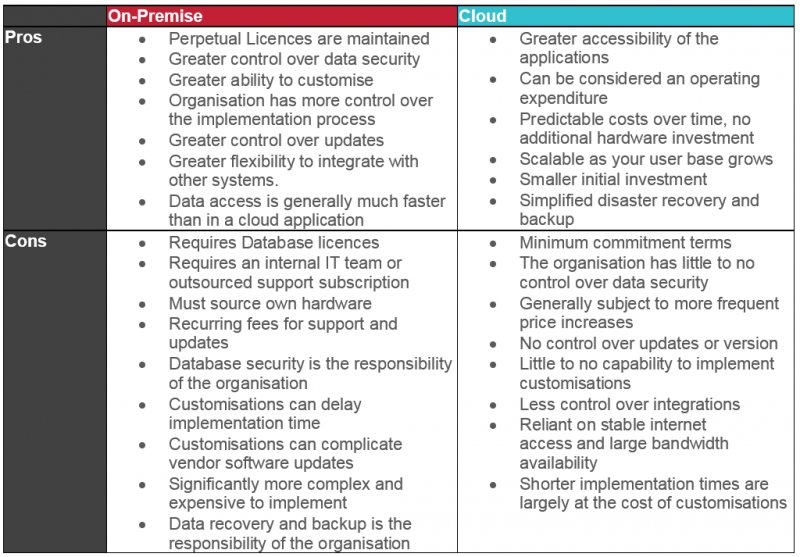